We've just swapped to Sky Broadband after previously being with BT, and whilst I know that for the first two weeks connection can be a bit erratic due to testing at their end I can't even get to play one game of COD (Modern Warfare and Vanguard) on the PS4 without losing connection, and don't believe this is normal. I expected the odd dropout, but not to the point I can't even go 10 mins without a dropout. What also makes me think something is amiss is that I'm not having issues with web browsing, youtube, netflix streaming etc etc.

I've tried resetting the router and I've tried setting up a new connection with the PS4 but it's not helped. I am currently connected by WiFi and have just bought an ethernet cable to try that (should be arriving today) but I'm not convinced it's a WiFi issue as I can stream on Netflix, youtube etc etc without issue. My routers is about 15ft away from the PS4 (and Sky Q, computers etc) and unobstructed line of sight.

It came up saying ERROR Lost connection to the HOST/SERVER. Connection timed out, and then once I left the PS4 on rather than turning it off and after a while it changed to another page saying CONNECTION FAILED Unable to access online services [Reason: DUHOK - Guernsey].

Anyone have any idea what's going on and how to fix it please?

Unfortunately Sky BB is known for their poor Wi-Fi hence why they offer boosters @ £3 per month extra. Connecting via Ethernet should fix the problem.
When you changed BB supplier did you set the Sky up with the same SSID & Passphrase as the old router or did you change these details on the PS4 to the new information?
Some users purchase their own router & then place the Sky (or other BB provider) in modem mode to improve the Wi-Fi.
What game/s are you playing when you receive that error?
S

@Anankha, thanks for your reply. It's COD Vanguard mainly and I've just tried Modern Warfare a couple of times, I've not tried anything else yet but I don't play other games using online multiplayer. Vanguard freezes mid game then crashes to the screen saying lost connection and if I leave that screen on it comes up with the DUHOK thing I mentioned in the first post . MW crashed once the game is finished and it's at the score table, that being said it did freeze for a second mid game play today but then carried on OK and so far has not lost connection and I've managed to play 5 online games back to back.

I've checked my wifi next to the PS4 and all looks good as you can see below, plus I've had Sky Broadband in the past with no issue. To answer your question I used the new router SSID and Passcode.

I'm on the router ending MZF 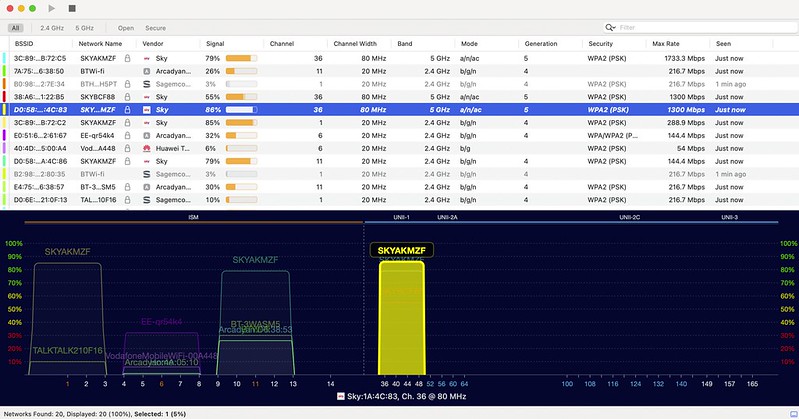 I would try changing the channel on the router as it may be congested if it is set to default Otherwise it looks fine.
Sky may be taking longer than usual to test your connection.
Have you also posted on the Sky forum? What do they suggest?
Last edited: Apr 1, 2022
S

@Anankha, thanks again. No real joy on the sky forum, after showing me how to go into the router settings and posting the stats etc that was showing that everything was working OK and suggested it was an issue with the COD servers, but I've seen or heard of anyone else having the issue so I don't think it's that.

As I said MW was fine this lunchtime, so I'll try Vanguard again over the weekend and see what that's like. Fingers crossed it is just Sky testing the connection, but if it is I'm surprised just how unstable it is in the early days.

Sorry to hear you haven’t had a decent reply on the Sky forum. I’ve read your thread & if you’ve ruled out a problem with CoD servers then hopefully your problem is just a temporary blip.
S

Thanks, fingers crossed. Thanks for your help

So I'm starting to think that it may indeed by the COD servers as I tried Modern Warfare last night and it crashed/lost connection every time I tried to play a multiplayer, however when I checked the PS4 connection in the main system menus that was saying it was fine. I then tried GT Sport online and was able to play that for over an hour issue free, no stutters or anything.

So IF it is indeed some issue with the COD server why does it only appear to be affecting me, can a router cause issues with certain servers and vice versa? If so is there a workaround?

I would expect if the router was the problem then it would affect all games. It may be you’re on a congested COD server & you are the unlucky player which oversubscribed the server so it is affecting you only.
Have you cross-posted on the COD forum (if there is one) or contacted the game devs?

support.activision.com
I can only find third party forums & none seem to mention server problems.
S

Thanks, I contacted Sledgehammer on Twitter but no response, I could only find 3rd party forums too and no-one is responding on there. I'll try that link though thanks.

So the mystery continues. I tried the ethernet cable with COD Vanguard today and it worked flawlessly so I thought it must be the WiFi after all, but then out of curiosity I tried WiFi again and that also worked flawlessly, played for 50mins without a hitch

Certainly turning into a puzzler. This morning Vanguard crashed/lost connection again, immediately went into the PS menus and the PS4 has also lost complete connection, plugged in the ethernet cable and all was fine. Obviously this suggests a wifi issue but it all seems to be so hit ans miss.

If it's a wifi issue I don't understand why as nothing else in the living room loses signal (Laptops, Sky Q, Smart TV), the wifi tests show the wifi signal is strong, and the router is only about 15ft away from the PS4 with a clear line of sight.

I'm tempted to try those adapters where you can run the broadband through your house mains plugs, are these completely safe to use and no increased fire risk etc?

The adapters I have searched for in the past seem to only be for connecting a device in another room via Ethernet rather than Wi-Fi. Sky have their own boosters @ £3pm. Probably cheaper to purchase & use your own router & place Sky’s in Modem mode.
I would try turning off all other Wi-Fi connected devices & see if that improves the connection, then turn on each device until the connection drops. If the connection drops when no other devices are connected to Wi-Fi then it is the Wi-Fi which is the problem. If it doesn’t then most likely another device is taking up the Wi-Fi connection.
S

Thanks, that's what I was meaning, I was thinking of using the mains adapters to connect the PS4 via ethernet, so I'd have one adapter for the router to plug into and then another for the PS4 to connect in to. I just have some weird idea that running these things would create an increase fire rise through no other reason than my own paranoia